In September, 2006 the CCCT performed a trail use survey at the request of the Montgomery County Parks Department. The Parks Dept. asked that four locations along the Capital Crescent Trail in Montgomery County be surveyed. CCCT added a fifth location to the survey - at the Georgetown Trailhead in D.C.

CCCT recruited and coordinated survey volunteers. A survey protocol developed by the Montgomery County Parks Dept. for a year 2000 CCT survey was used. Volunteers took trail use counts between the Labor Day weekend and October 4 - providing 23 hours or more of detailed use counts at each of the five survey locations.

The Mont. Co. Parks Department has performed a detailed analysis of the data and is presenting the final draft of its formal trail survey report to the Planning Board on July 19, 2007. CCCT has performed a preliminary, informal analysis. A few major observations from that preliminary CCCT analysis are presented below. A description of the survey locations and survey protocol, and more results of the preliminary CCCT data analysis are available at CCT2006survey.pdf. The final report issued by the Mont. Co. Department of Parks is available here as a pdf.

CCT use is very high, with tens of thousands of weekly uses. 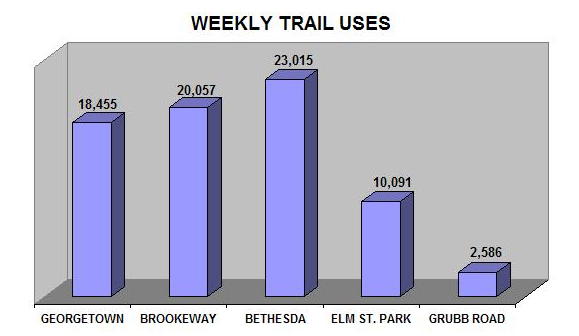 The chart above shows projected weekly uses at all five survey locations:

These weekly uses are projected from over twenty hours of use counts at each survey location.

All three survey locations along the permanent CCT had weekly projected uses in excess of 18,000 uses, with 23,000+ uses at Bethesda. These are extremely high rates of use - few trails in the nation have similar use rates.

Trail use appears to be low on the Interim CCT east of Bethesda when contrasted with the uses on the permanent CCT. But a weekly trail use of 10,000+ at Elm Street Park is higher than on any other trail in Montgomery County. Trail use at Grubb Road compares well with use levels on many of the local trails in Montgomery County.

CCT use is highest at Bethesda, where use peaks to 565 uses/hour and regularly exceeds 400 uses/hour. 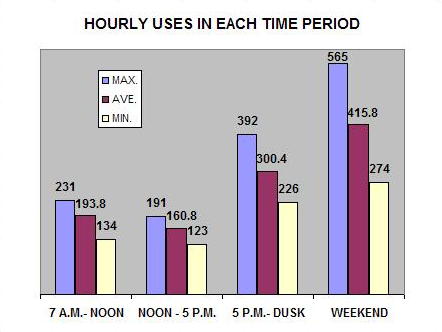 The chart above shows that hourly use rates at Bethesda peak during the weekend, but use is also high during weekday evenings.

This use is very high for a 10' wide trail with mixed modes of traffic. Complaints of conflicts between cyclists and pedestrians are common.

The trail is shared between cyclists, walkers and joggers with no one group being a "majority" user at the two survey locations in urban Bethesda. Bicyclists are the largest group of users elsewhere.

The chart below shows the weekly use by mode at the Bethesda trailhead. Cyclists and walkers use the trail in almost equal numbers, with joggers also having a very strong presence. "S. Walkers" and "S Joggers" shown in the chart are those using the gravel shoulder alongside the asphalt trail. The share of uses by mode is similar at the Elm Street Park survey location. 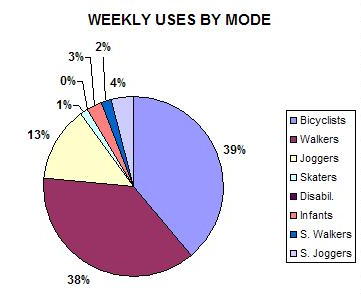 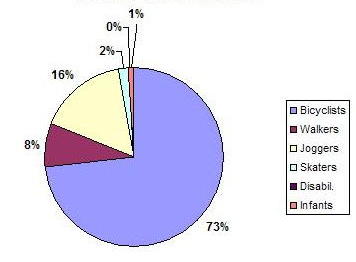 There is a strong commuting use of the trail, with a "bicycle rush hour" seen at the Georgetown Trailhead. 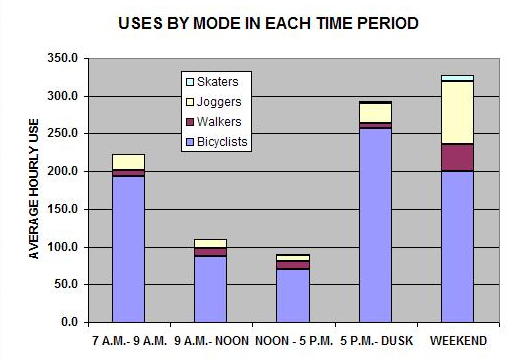 Cycling uses average about 200 uses/hr during the two hour 7-9 a.m. weekday period at Georgetown. Weekday evening cycling uses are even higher, as recreational cyclists apparently join the commuting cyclists in using the trail.

A distinct surge in bicyclist uses is also seen during the rush hour period in at the Brookeway Drive location five miles up the trail from Georgetown, although not as strong as is seen at Georgetown.

A great majority of users prefer the CCT over the C&O Canal Towpath. 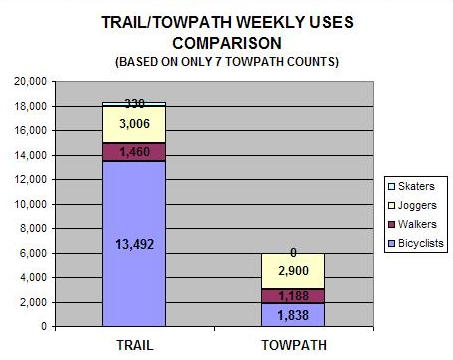 A small "side study" of seven one hour use counts was performed on the gravel C&O Canal towpath, adjacent to the CCT Georgetown Trailhead. The projected weekly use rate derived from that data for the towpath is 1/3 that of the CCT. Most cyclists use the asphalt paved CCT. A significant share of walkers and joggers also prefer the CCT over the towpath.

Use of the Interim CCT east of Rock Creek is only a small fraction of CCT use elsewhere. 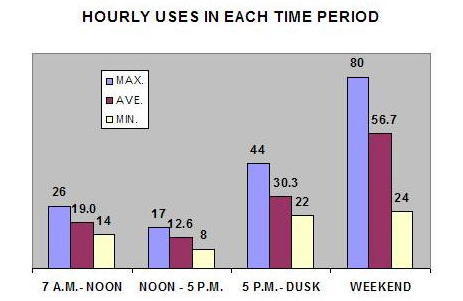 Trail use at Grubb Road peaks at 80 uses/hr on weekends, and the projected weekly use is 2500+. This is a very respectable use compared to many local neighborhood trails, but falls far short of the potential the CCT has to be a regional trail connecting downtown Bethesda with downtown Silver Spring. The stark contrast between observed trail use at Grubb Road and elsewhere on the CCT invites a public discussion about what is needed to complete the CCT to better serve Silver Spring and its neighborhoods.

Volunteer support for this survey is a strong indicator of the support the CCT enjoys.

Many people responded shortly after the CCCT called for volunteers to help conduct the survey. The Washington Area Bicyclists Association, the Potomac Pedalers Touring Club, and several neighborhood groups joined in spreading the call for volunteers. CCCT recruited 92 volunteers in less than a month, and in the following month these volunteers contributed over 140 hours of time for detailed use surveys at their assigned trail locations. Many of the volunteers thanked us for giving them the opportunity to give something back to the trail.

This survey would not have been possible without these volunteers, and we thank them for their contribution. Their enthusiastic support is of itself one of the strongest indicators we could have of the importance the CCT has to the daily lives of many people throughout the area.

Complete results of the preliminary CCCT data analysis are available for all five survey locations at CCT2006survey.pdf. Contact us at [email protected] if you have questions about the survey that are not addressed here.