A Trail Profile and History

The Capital Crescent Trail, connecting from Georgetown D.C. to west Silver Spring in Montgomery County, MD, is a hiker-biker trail running for 11 miles along the right-of-way formerly used by the Georgetown Branch rail line of the Baltimore and Ohio Railroad. The transformation from a disused single-track rail line to a first-class trail has been an impressive example of cooperation between civic groups and governments. 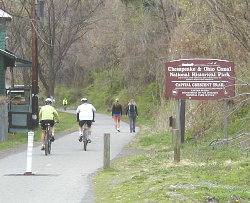 The Capital Crescent Trail is complete for seven miles from Georgetown to Bethesda. This section features a 10-foot wide asphalt path and wherever possible an adjacent 2-foot wide stone-dust trail for joggers. The Trail is currently closed from Bethesda to Silver Spring due to Purple Line light rail construction, with alternate routes as described here. It will re-open in 2021-2022 as a grade-separated paved trail next to the Purple Line, extending into downtown Silver Spring, where it will connect to the Metropolitan Branch Trail.

The Trail is used for both recreational and commuting purposes, connecting residential, commercial, and employment centers of Chevy Chase, Bethesda, Silver Spring, and Washington D.C. Most of the Trail passes through parks and other wooded areas; it passes over four bridges, through two tunnels, and provides beautiful vistas over the Potomac.

The Trail connects with a number of other trails, the most prominent of which are the C&O Canal Towpath and the Rock Creek Trail; the connections with the latter permit a circular trip of about 22 miles.

The story of the Capital Crescent Trail:

Construction began on the Georgetown Branch rail line before the turn of the century and the line was put into use in 1910. It was exclusively a freight line and carried primarily coal and building materials to Chevy Chase, Bethesda, and Georgetown. Trains stopped running in June 1985. See our History page for more history of the Georgetown Branch rail line before trains stopped running.

In 1988 the Montgomery County Government purchased the right-of-way from the D.C. line to Silver Spring under the National Trails Systems Act. The Park and Planning Department was given jurisdiction from the D.C. line to Bethesda, and from Bethesda to Silver Spring the Department of Public Works and Transportation was made responsible, in view of possible future use of that portion by transit in addition to the Capital Crescent Trail.The Coalition for the Capital Crescent Trail was formed in 1986 to promote the development of a hiker-biker trail along the disused right-of-way, with a membership comprised of community, environmental, and outdoors-oriented groups, as well as many individual citizens. Since then, the Coalition has worked with the Federal, Maryland, and Montgomery County governments and with civic groups and individual citizens to encourage development of a first-class trail.

In 1990, following appropriations by Congress in 1989 and 1990, the National Park Service purchased about 4.3 miles of right-of-way in the District of Columbia from Georgetown to the D.C./Maryland boundary and developed the Trail as a component of the C&O Canal National Historical Park. The Intermodal Surface Transportation Efficiency Act (ISTEA), passed in 1991, provided for substantial funding of transportation enhancements, including rail-trails; as a result Federal funds became available to construct the substantial paved portion of the Trail from Georgetown to Bethesda and the bridge over River Road.

In 1996, Montgomery County funded the removal of tracks and ties on the right-of-way from Bethesda to west Silver Spring and its development as an interim hiker-biker trail (temporarily designated the Georgetown Branch Trail) pending a decision as to construction of the transitway. In 1998 the Montgomery County Council voted to fund work needed to pave and fence for Trail use the tunnel under Wisconsin Avenue, after months of lobbying by the Coalition and civic groups. The tunnel opened in August 1998, with optimum routing and lighting as a result of Coalition efforts and funding.

A major gap remained in the Trail midway between Bethesda and Silver Spring, with the Rock Creek Trestle closed as unsafe. In 2000 the Montgomery County Council voted to fund the rehabilitation of the Rock Creek Trestle, after the Coalition, together with civic groups, sponsored two rallies and a petition drive to demonstrate the wide popular support for opening the trestle. The Coalition then led a successful effort to have observation "bump-outs" included in the trestle design, and contributed $75,000 toward their cost. The trestle opened for trail use in May 2003.

The goal of the Coalition is to complete a first-class trail continuous to downtown Silver Spring with amenities - kiosks, water fountains, benches, and other features appropriate to a rail-trail nationally recognized as outstanding.