As of December 24, 2019, the trail was repaved and open, and the Plaza open with benches. See photos at the bottom of this page. Trash/recycle cans and an interpretive sign came a little later. Landscaping was done by spring 2020. The promised trail use counter was finally installed in March 2021. Most signage is installed, but some is still missing as of the end of 2021.

In mid-March 2019, Ourisman Honda began work on a triangular public plaza next to the Capital Crescent Trail where it meets Bethesda Avenue. The land will come from the Ourisman property, and will be freed up by moving their vehicle entrance farther west along Bethesda Avenue. The plaza will thus adjoin the trail, and the trail will also be widened to 16 feet or wider from the Wiener Plaza (located behind Ourisman's garage) up to Bethesda Avenue. This widening is achieved with land from Ourisman on the west side, and on the east side where the existing benches and tables are set farther back.

The project includes constructing a wrap to cover the full height of the Ourisman garage, on the front, trail side, and back. This wrap is not opaque and is intended to be decorative.

Status as of December 24, 2019: The Plaza is open, with the benches installed. Only one construction cone remains, over the hole where a trail use counter is planned to be, but was still not installed as of the end of 2020. One interpretive sign and a tiny Georgetown Branch ROW sign are installed. Trash/recycle cans came a little later. Some additional landscaping came in spring 2020. More signage is still needed.

Status as of December 14: The trail has been repaved from Wiener Plaza (in back of the Ourisman garage) up to Bethesda Ave. Construction cones and barriers have been removed, except right around the Plaza. Along the trail and Plaza, much of the landscaping has been planted - there will be additions in the spring. A tree has been planted in the sidewalk between the Plaza and Bethesda Ave. The benches for the Plaza appear to have been delivered and are awaiting installation. Signage and other elements will come later.

Status as of November 16: Fabric wrap installation on the garage appears complete, although construction equipment remains in the trail and the detour is still in place. Installation of the HDPE panels on the fence and at ground level on the garage is complete. There has been no progress in the Plaza itself since late September. It is awaiting installation of benches, signage, other elements, and landscaping.

Status as of October 6: Ourisman says that progress on the garage should resume soon: "Fabric wrap installation should begin mid October and take approximately two weeks to complete." Installation of an HDPE fence to block the view into the garage should begin the week of October 7, starting at the plaza and working south. The brick plaza surface was laid in mid-September, with gaps left for the plantings. The landscaping is scheduled to happen from late October into November. The southern detour point was temporarily moved north to connect directly to the path in back of the Flats apartment building, so the asphalt surface of the detour bypass could be replaced with a permanent surface of pavers. The detour point will move back south before garage wrap installation begins.

Status as of September 10: The steel framework to mount the wrap on the garage is completed, but putting up the "tensioned, perforated polyester fabric" wrap has not started. Ourisman's old vehicle entrance ramp has been removed and the sidewalk relaid, and re-configuring their front parking is done. The concrete base to support the brick plaza surface has just been poured, with holes left for the planters. A large white on blue HONDA sign is installed next to the sidewalk and plaza, where the "MONUMENT SIGN" is shown in the planning diagram below. It is very visible, roughly 10 ft high by 5 ft wide, and lights up brightly after dark.

Status as of August 8: The steel framework to mount the wrap on the garage continues moving along gradually - see photo below. Adding triangular extensions is about 2/3 done, to produce the shape shown in the early design image below. Ourisman's new vehicle entrance on Bethesda Avenue is now in use, and re-configuring their front parking is mostly done. The first phase of plaza construction has begun with pouring the plaza's concrete border - see photo below.

Status as of July 16, 2019: The steel framework to mount the wrap on the garage is moving along. A vertical support frame is up, and adding triangular extensions has begin, to produce the shape shown in the early design image below. This has gone slower than first hoped, due to the tight workspace and complexity of the wrap framework design. Construction of Ourisman's new vehicle entrance on Bethesda Avenue is complete, so re-configuring their front parking should start soon, which will allow switching traffic to the new entrance, and then plaza construction can begin.

Ourisman generously agreed to build the Plaza as part of the settlement of its encroachment upon the Trail right-of-way, rather than engage in potentially protracted litigation. CCCT has provided input about the configuration of the Plaza and the overall plan for the area south of Bethesda Avenue, aiming to reduce congestion on the Trail at this very busy location. There will be additional room for pedestrians, added seating, and more space for cyclists. CCCT will provide updates as this project progresses.

Below is a planning diagram of the plaza area. The plaza is the triangular area near the center of the dashed rectangle, with the trail shown immediately below it with light diagonal lines. The sidewalk and then Bethesda Avenue are to the upper right, and the reconfigured Ourisman Honda driveway and parking are to the upper left. The plaza will have seating, plantings, and some signs. Note that Bethesda Avenue runs East-West, so North is towards the upper right in this diagram. 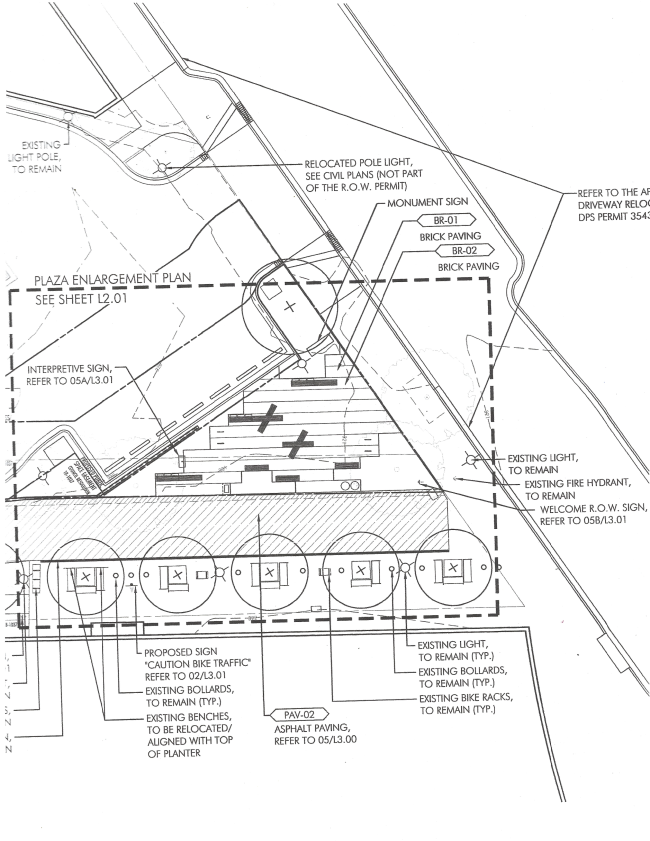 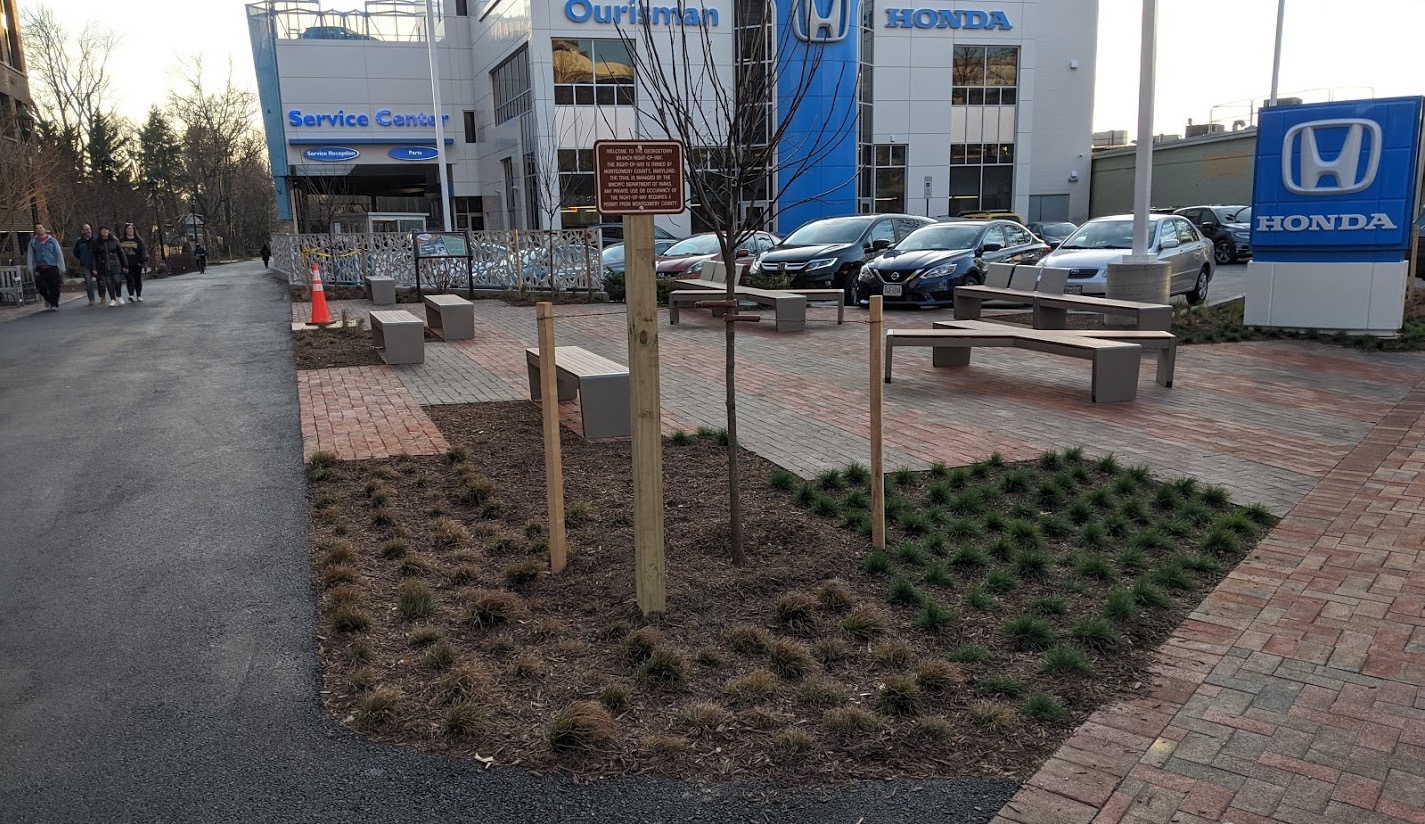 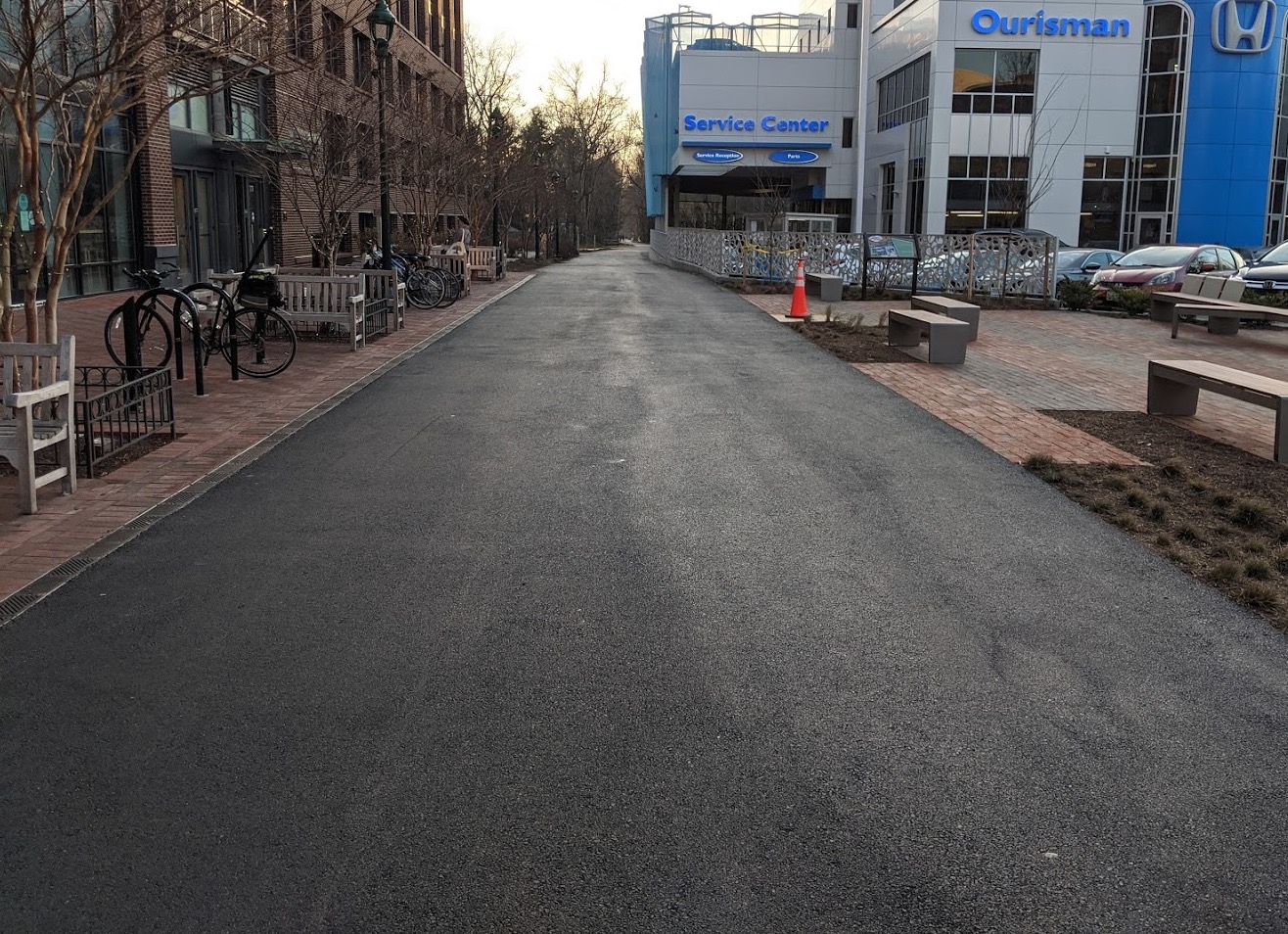 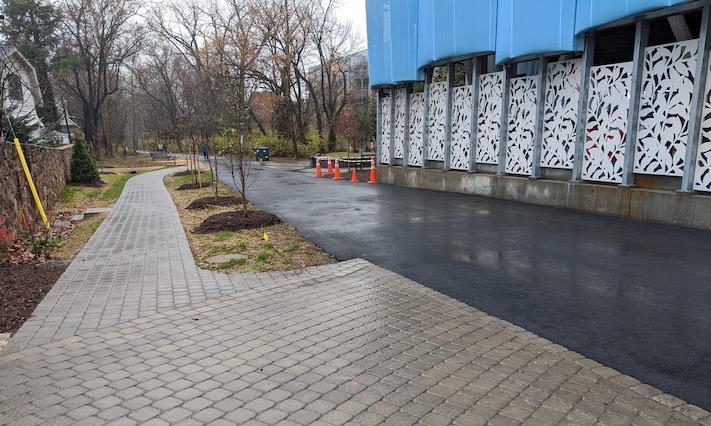 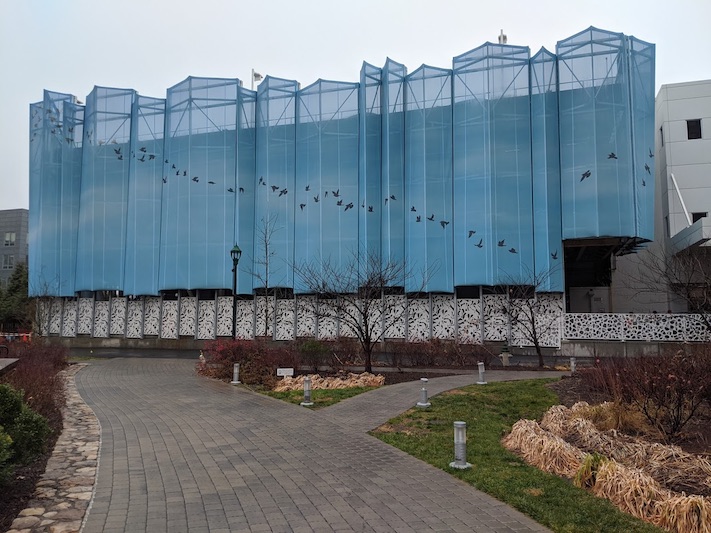