This page about Plaza design and construction is preserved for historical interest.

The Neal Potter Plaza was dedicated on Saturday morning, November 3, 2018, and is open for use. While a few things remain to be installed (bike rack, bike repair station), it is a great improvement over the previous gravel parking area.

On October 11, Montgomery Parks announced that what was called River Road Plaza during construction will named for former Montgomery County Executive Neal Potter, and that dedication is scheduled for Saturday November 3 at 10 am, at the Plaza. The announcement is:

Repaving extended the asphalt trail surface about 2 foot on each side, out to meet the new brick/paver surfaces. They paved just the length where the trail abuts the new paved surfaces of the Plaza, no further along the trail.

The East (Episcopal School) side of the Plaza looks done, with the curved bench, brick paving, and new sod all done. On the West side, all that appears left to do is some stone pavers remain to be laid, and the triosk display panels are not installed.

As construction of River Road Plaza nears completion, the Trail will be repaved in the Plaza area. This will take about 4 hours, during which the Trail will be blocked off from the south end of the bridge over River Road to the north (uphill) end of the construction zone for the Plaza. On 10/5, Montgomery Parks told us that repaving would now be done overnight to reduce disruption for trail users, and would happen during the week of October 8-14.

See the Montgomery Parks CCT page for their notifications on this paving:
https://www.montgomeryparks.org/parks-and-trails/capital-crescent-georgetown-branch-trails/

During the closure, Trail users going south (downhill) will need to leave the Trail where the Plaza starts, by turning west towards Security Storage. Trail users going north (uphill) will need to leave the Trail just before the bridge. A detour will be marked, using a side path south of River Road, using the Security Storage driveway north of River Road, and crossing River Road at grade. Watch for flagmen and park police directing traffic during the trail closure.

6/11/2018 update: The production process has begun for the engraved brick pavers to commemorate donors of $500 or more, so pavers are not available for future donors.

As of early June 2018, the metal posts to support the pergola have been installed, one of the curved seating walls is in place, and the other seating wall is in mid-construction.

Here is a March 1, 2018 article in Bethesda Magazine:
Construction Work Begins for New Park Along Capital Crescent Trail in Bethesda

February 26, 2018 update: Construction has started! The Plaza site has been enclosed with orange netting, and work has begun to put in a drainage system next to the trail and bridge.

December 2017 update: We are pleased to announce that the River Road Plaza has reached its initial funding goal, thanks to contributions from individuals, civic organizations, and the business community. In November 2017, bids were let, offers received, and a contractor selected. According to the Montgomery County Parks Department, the work is slated to begin in January 2018.

With the help of The Montgomery County Parks Dept and The Montgomery Parks Foundation, the Coalition for the Capital Crescent Trail raised the funds necessary to cover the contract awarded to construct the basic plaza, and we have obtained the necessary permits, and have an approved design in hand. Excavation and soil remediation is a large and expensive part of this work, which is necessary due to the many years that construction equipment and vehicles were stored on this site.

Many significant amenities from the original design have been set aside awaiting further funding. We hope much of this will be included in the final plaza with your help. All contributions are tax-deductible, and you can donate online. At the bottom of this page are links to view 4 full-page drawings of the project. 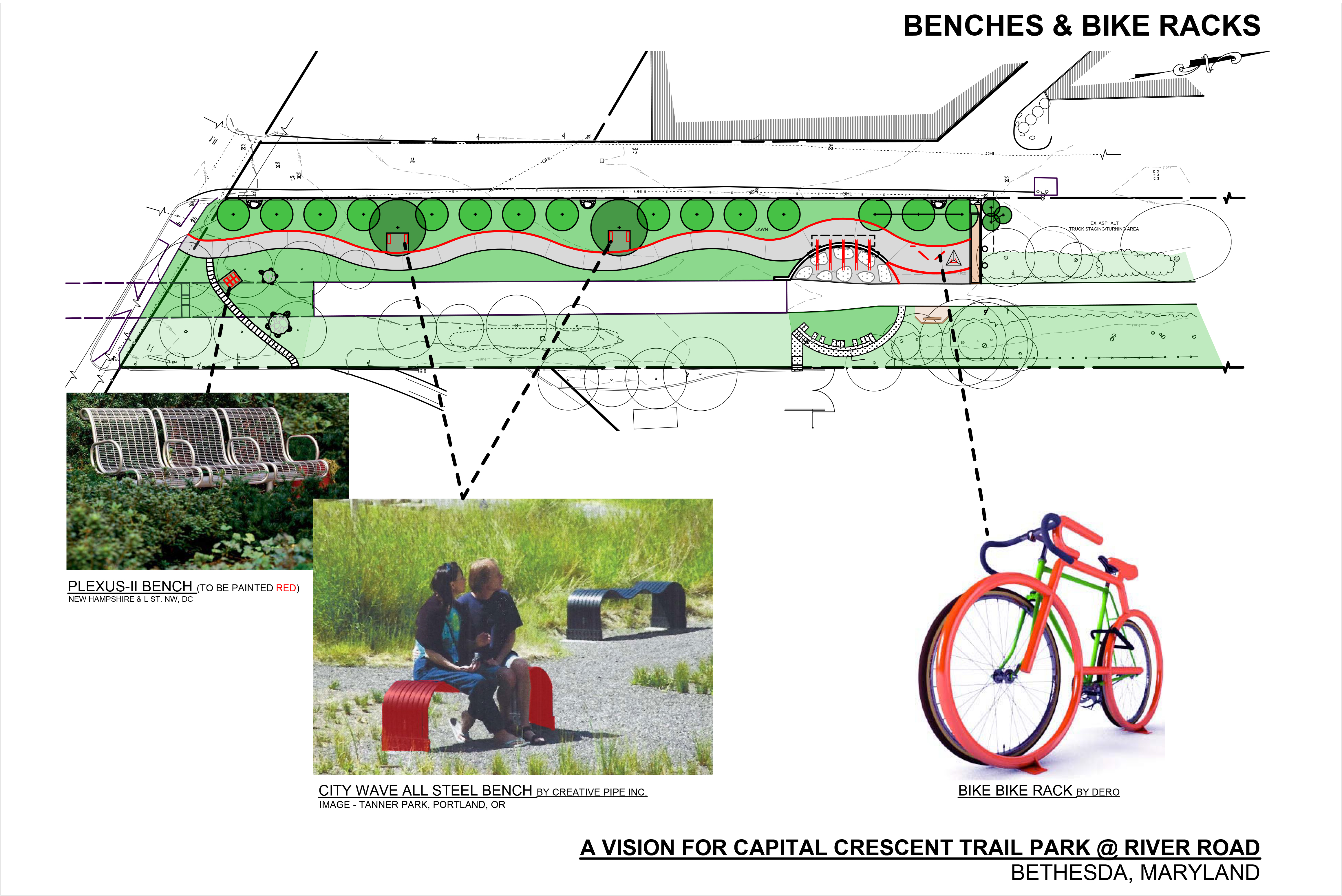 You can also donate by mail to: